In the year 1863, a community by the name Fairview was established about 20 miles to the northwest of the now-called Bryce Canyon National Park. Now, that community goes by the name Panguitch and is situated on a valley that is just 6600 feet above the sea level and has all year cool temperatures. This makes it hard for people to grow their crops.

During the second season of winter for the Fairview community, there was deep snow that covered all their crops. This season came in very early and left the residents with immature wheat that they had planted. The immature wheat was difficult to grind. They then sought the option of boiling the wheat but still, the wheat was not well-edible. They then turned to fishing and hunting but again, this was a difficult task since they would have to compete with the red Indians for the available meat.

This left the leaders of the community in a tough situation due to the lack of food. This is when the leaders came together and decided to send out two troops to go and look for food supplies in the neighboring communities. One group was sent north towards Gunnison, which is 110 miles away. They decided to get through a series of trails that they anticipated would have less snow. The other troop was sent to the west on the other side of the mountain to a community called Parowan. This was a 45 miles trek. 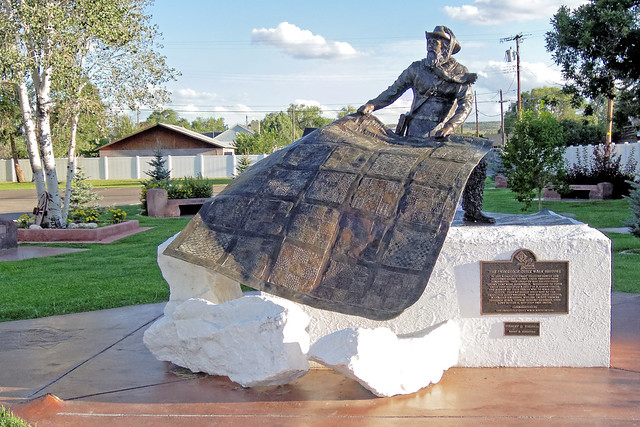 Hardship along the Journey

The party that headed towards Gunnison found their path was blocked by snow and they returned almost immediately. This left all hopes to the seven men who were bound towards Parowan. The Parowan-bound troop started off at a good pace as they travelled on wagon. This was only the beginning. As they continued with their journey, the snow started to deepen and it apparently became harder to travel by wagon when they came across a mountain pass. This meant that they would now have to continue with their journey on foot. As they went on, they made very little progress because their legs would regularly plunge into deep snow drifts. After noticing the hardship they had to endure, they lay down a quilt and started to pray for knowledge, assistance and guidance.

Realization of the quilt walk

As the men were praying, they noticed that the quilt they knelt on the snow was able to support their weight. With this realization, they stood and started laying a blanket after another in order to finish their walk over the mountain. At long last, they reached their destination at Parowan and went ahead to acquire as many flour sacks as possible that they would carry. The community at Parowan was very helpful as they assisted them as far as they themselves would reach up the mountain. Soon as the Parowan community reached their end point, the men started walking on their quilts again as they carried the heavy flour sacks. On reaching their wagons, they loaded the flour sacks on them and started their way back to Fairview. On arrival back to Fairview, they were welcomed with great jubilation by the residents as they had saved them from hunger. The expedition was estimated to have endured a total of fourteen days to the Parowan community and back.

Later on, a conflict ensued between the Native Americans and the other communities, including Fairview, which led to them being evacuated for some years. In 1871, the community returned to this area and they renamed the community Panguitch. Up to this day, the residents of Panguitch every year hold a celebration to commemorate the seven brave men who used the quilt to walk. This is done with a quilt walk event as well as a town memorial to honor the original settlers.
For a tourist, welcome to Panguitch and experience this famous event every year. Pack your bags and come experience the funn and historical nature of this town