The Bryce Canyon is located near the Zion Canyon and the Grand Canyon in Utah. The park was named after the Mormon pioneer, Ebenezer Bryce. Perhaps there is nowhere in the world where forces of headwater has caused natural amphitheater than at the Bryce Canyon. The Bryce canyon has very unique structures referred to as the hoodoos, which are formed from water, ice and wind erosion that attracts over a million visitors each year. Many of them descend on the trails which gives horseback riders and hikers a closer look of the sculptured pinnacles and the fluted. 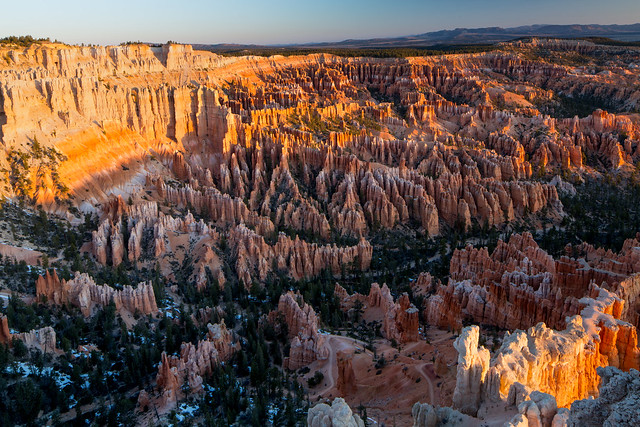 The park has a fascinating geology. It follows along the edges of Paunsaugunt plateau. In the park there are features of sedimentary rocks showing depositions of the last Cretacious part that is over 50 million years old, in the Cenezoic Era. The most conspicuous sedimentary rocks found in the Bryce canyon include the Tropical Shale and Dakota Sandstone. The numerous streams flowing in the Canyon have eroded the plateau forming a bowl that is horseshoe-shaped. The Bryce amphitheater is the most striking at the heart of the park, covering over 6 square miles.

The awesome blend of color and rock forms a mysterious blend that can leave one glued on the Bryce canyon for a long time early in the morning. The warm orange and yellow beams radiates from the pigmented walls scattering light illuminating pale spires.

The legend of the rocks

The Native Americans lived in the park area for over 10,000 years. The native tribes are the Paiute and the Anasazi Indians. The canyon is also well known for the myth which is behind the rocks. The natives believed that there were once animal-like creatures which changed into people. These creatures were so bad that Coyote turned all into rocks. These creatures huddle together to date with their faces painted like they were initially before they were turned to rocks.

Life at the canyon

Bryce Park has an array of plant and animal life. The mammals found at the canyon include deer, mule, bobcats, marmots, ground squirrels, mountain lions, coyotes and foxes. It also has over 160 birds’ species including the swallows and swifts that migrate in winters and ravens, jays, eagles, owls and nuthatches. There also a variety of trees that has three life-zones depending on the variety.

When looking for a destination for horseback riding and hiking at Utah, the Bryce Canyon is the perfect destination. You will have the perfect scene of the colorful hoodoos during the sunny season and feel the full and natural force of erosion.